Lionel is based in Djibouti and from there he manages the voyages of the WFP-chartered vessels VOS Apollo and VOS Theia. It was not easy to lock thirty minutes in his incredibly busy schedule and sure enough he arrived late, directly from the port of Djibouti.

“Sorry, I normally make a point of being punctual, but there has been some last minutes changes that needed my attention” - he says as he enters the office that hosts the Logistics Cluster team in Djibouti.

“Some of the cargo was not on the bill of lading as it had arrived late at the warehouse” - he continues, “but the sending organisation insisted it was vital that the boxes reached destination with this voyage, so I had to convince the captain, review the documentation and reach out to port labour to have everything charged on the vessel.”

It is hard to be upset for the delay now, if anything, we are even more eager to know about his work.

“Lionel, how did you get to coordinate such a complicated operation, what is your background, how did you end up here?”

“I am a Logistics Officer, I have been working with the cluster before, in my last assignment before coming here I was part of the response to the Cyclone Enawo, in Madagascar. Yemen is a completely different operation, more complex, sensitive, and on a very basic level we deal with much bigger volumes of cargo and many responding organisations. I was excited to come here though, I love my job and doing it in a large humanitarian operation gives you the scale of your impact, which is rewarding."

It is definitely not easy, Yemen is currently in a very complex and precarious situation. 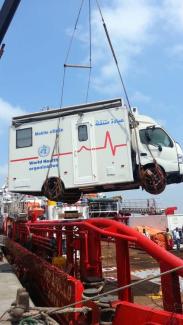 “Can you explain what the Logistics Cluster does in Yemen?"

“The Logistics Cluster has been active in Yemen since 2015 in support of the emergency response. The cluster has been providing coordination for the numerous actors involved in the humanitarian operations, gathering and sharing critical operational information and it has been facilitating a number of common logistics services made available by WFP, as the lead agency of the cluster, to the entire humanitarian community. In a nutshell we have to make sure that resources are coordinated and distributed in the most efficient and effective way, so we work to facilitate that."

“That can’t be easy. What is the biggest challenge you are facing?"

“It is definitely not easy, Yemen is currently in a very complex and precarious situation. The biggest problem we have is access. Infrastructure within the country is badly damaged, but more crucially, there is limited transport capacity into the country itself. For a long time, the only access has been by sea from Djibouti to Aden."

“Exactly, the WFP-chartered VOS Apollo has been plying the route Djibouti-Aden since April 2016, becoming the critical link to the south. Recently, the port in Hodeidah reopened so in March 2018, WFP chartered a second vessel, the VOS Theia which represents an important lifeline to the north."

“How are these vessels used exactly?"

“These vessels work as cargo transport ships, weekly passenger service and emergency rescue and evacuation. To date, approximately 7,000 m3 of relief items, the equivalent of some 250 20-foot containers, and 2,300 passengers have been transported thanks to these services, supporting over fifty organisations responding to the crisis in Yemen." 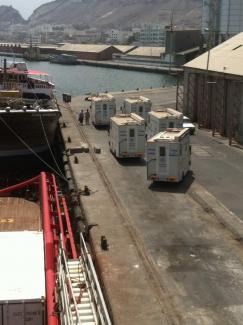 “This is a lot of cargo and an impressive number of passengers! Could you give us a better insight on your role in this massive operation?”

“I am in charge of coordinating the sea operations from the port of Djibouti, mostly cooking in the sun all day, liaising port authorities and making sure that the cargo is properly loaded on the vessels and leaves for Yemen on time. More generally I lead the planning, consolidation and tracking of all sea transport requests submitted to the cluster.”

“Is there one voyage you coordinated that left you with special memories?”

“We recently celebrated the completion of the VOS Apollo 100th round-trip with all the crew, the shipping agent and the passengers on-board. Besides the symbolism, with this voyage the Apollo carried five mobile clinics on behalf of WHO. According to the Health Resources Availability Monitoring System (HeRAMS), only 45 percent of health facilities in Yemen are currently functional. These WHO mobile clinics, will be used as primary healthcare facilities to provide additional support in the most vulnerable governorates and districts in the south of Yemen. But really, every voyage is a story, because every voyage brings not only cargo and people, but the promise to save the lives, alleviate the suffering and protect the dignity of the people we serve."

“This is a really good image you are leaving us with; we are looking forward to share your story with the Logistics Cluster community."