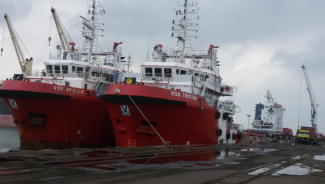 Currently, and due to the security situation in Yemen, the city of Aden, in the southern region of the country, is hardly accessible by air and by road; humanitarians have a hard time reaching the people affected by the crisis, and dispatching life-saving relief items to the region is increasingly difficult. That was, before the VoS Apollo started sailing between Djibouti and Aden on a regular basis.

To facilitate access of humanitarians to the region, the United Nations World Food Programme, as lead agency of the Logistics Cluster, has chartered the VoS Apollo in April. To date, the vessel has crossed the stretch that separates Djibouti from Yemen 60 times, eating up almost 8,000 nautical miles (i.e. more than 14,600 km) and transporting a total of 553 passengers from a plethora of UN agencies, INGOs as well as national NGOs. In addition to all of this, the VoS Apollo has proven to be instrumental in transporting much needed humanitarian cargo to Aden, including NFIs, medical items and all the equipment needed to sustain and scale up the humanitarian response in the region. 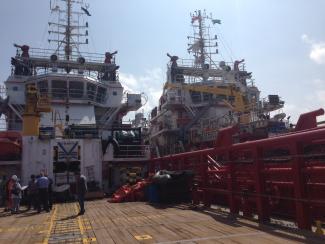 After its 30th voyage, the Apollo feels like home to some. Indeed, due to the unpredictable security situation on the ground, she has been providing, for the past 30 weeks, a safe haven to those UN staff who cannot overnight in Aden, and for whom the Apollo is not only a means of transport, but also provides accommodation and a hot meal at the end of the day . Emanuele, a logistician with the World Health Organisation who has travelled on board of the Apollo four times, is among the regular users of the service. “The service provided through Apollo is fundamental for the implementation of our activities in Aden, both for passengers’ movements and for goods shipments” he says “Being on the Apollo is also fun; I had the chance to meet interesting people, among the crew and other UN/INGOs staff members. People with whom I had the opportunity to exchange professional and personal opinions and to learn something new. Also, the professionalism of the Apollo crew makes the life on board smooth and safe”.

The Apollo has left Djibouti on 04 December, after more than 30 weeks at sea, for some maintenance and dry docking. During her absence, Apollo’s sister ship, VoS Triton, will continue sailing in the Gulf of Aden, carrying humanitarians and relief items on board, to ensure the response to the crisis does not stop.