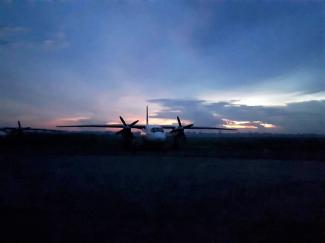 Since the beginning of 2017, the Central African Republic is going through a period of great instability characterized by the multiplication of conflicts in isolated parts of the country. To enable the humanitarian response in this rapidly changing environment, physical access is key. Over the last months, the Logistics Cluster has been working closely with OCHA and other humanitarian organisations to set up an air cargo response to hot spots in the country. These are areas affected by a sudden outbreak of insecurity and violence causing a sharp increase in the basic needs of the population.

Since the end of August, the Logistics Cluster is facilitating air cargo rotations to these hot spots for the humanitarian community as a whole. The rotations have been made possible through contracting an Antonov 26 from a national private air company, funded by the Common Humanitarian Fund.

The identification of hot spots is established by the Humanitarian Coordinator and the sectors of prioritized activities are defined with OCHA through coordination meetings. This air cargo response allows to deliver lifesaving items in areas where road transport is no longer a viable option.

Over the last three weeks, more than 18 mt of items were delivered on behalf of four organisations in three major hot spots of the country. In Zemio, ACTED and Médecins Sans Frontières have been able to install motor pumps and to set up tarpaulins in a very short time and in Bangassou, UNHAS prepositioned 27 liters of fuel to reinforce its passenger air transport in the eastern region. 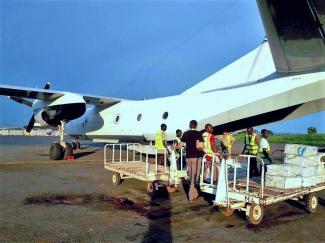 Manon Grossieres, coordinator of the Rapid Response Mechanism (RRM) for ACTED explains: “It is very challenging to access the areas most affected by the crisis, such as Basse Kotto, Mbomou and Haut Mbomou. Over the last three months the roads between Bambari and Bangassou and Bangassou and Obo have become impossible to access due to high security constraints. The air cargo facilitated by the Logistics Cluster allowed us to deliver emergency assistance in the south eastern zones of the country such as Bangassou and Zemio. ACTED’s RRM Teams have been able to assist more than 2,271 households in both cities and 11,456 people in total.”

This project is part of a broader strategy, seeking the reinforcement of regional logistics hubs funded by the Central Emergency Response Fund. The air cargo and the regional hubs will significantly improve the accessibility and the response capacity in the country.