It’s the peak of the rainy season in the Central African Republic (CAR). The downpours are heavy, the foliage is a thick lovely green, but the earth roads are muddy and mostly impassable. It is good news for rain-fed agriculture but a real challenge for humanitarian organisations trying to bring lifesaving relief items to people in need

A critical decline, in food production and the general ability to maintain livelihoods means almost 3 million people require humanitarian assistance across CAR. That is equivalent to the entire population of Madrid or Nairobi. The transportation of relief items is a crucial yet ever-challenging component of the humanitarian response in the Central African Republic (CAR).

Reaching these people with humanitarian assistance — healthcare, nutrition, food, shelter — presents logistics challenges for two main reasons: the first is that many are in remote places hard to reach due to the lack of road infrastructure. The second is that these groups are constantly on the move to escape the continued conflict that had engulfed the country since 2014. Right now, one in four people in CAR is displaced.

Some of the worst affected locations are almost completely isolated as so few roads lead to them — and those that do are often not robust enough to support large trucks. Some locations can even take up to 3–4 weeks to reach! The struggle to get there is further hindered by the prevalent insecurity, often making it far too dangerous to travel via road.

In order to reach these remote places, the WFP-led Logistics Cluster is facilitating the movement of lifesaving relief items via emergency airlift. 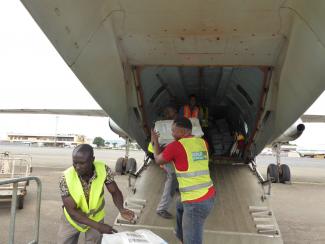 Humanitarian groups have jointly identified five priority locations for the airlifts to land in the east and south eastern parts of the country where needs are particularly high. These are Bangassou, Birao, Bria, Obo and Zemio, chosen for their strategic position and actual capacity to receive the aircraft securely.

Since 2017, the Logistics Cluster coordinates the access to free-to-user space on, three WFP contracted key aircraft, which are diverse in size and capacity to maximise efficiency. The largest is an Antonov, which has a cargo capacity of 5 metric tons — equivalent to 2.5 cars or 1 African elephant. Then slightly smaller, but still incredibly effective, are the Beechcraft, which can carry up to 1.2 metric tons of cargo. Last but not least, is the Cessna Caravan with a payload of 800kg. The two smaller planes are particularly strategic as they’re able to land without large runways and therefore can more easily access some of the very isolated areas.

25 flights have already been flown this year, transporting over 100 metric tons of relief items for 15 humanitarian organisations. The lifesaving cargo ranges from PlumpyNut (a peanut-based paste for treatment of severe acute malnutrition) to malaria test kits; and these airlifts are especially crucial for the transportation of sensitive items such as medicine and vaccination kits.

This blogpost was originally published on the WFP Insight page here.