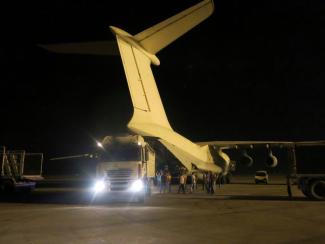 The north-eastern governorate of Al-Hasakeh experienced severe access disruptions in 2016. Landlocked and inaccessible from inside Syria since mid-2013 due to the presence of Islamic State of Iraq and Levant’s (ISIL) fighters controlling all key access routes.

The governorate remained cut off from humanitarian reach over the entire first half of 2016, leaving tens of thousands of families without access to critical relief supplies and humanitarian services.

With all in-country and international access points impassable, WFP, as lead agency of the Logistics Cluster, resorted to the establishment of an emergency air-bridge linking the capital Damascus to Qamishli, one of the main urban centres in Al-Hasakeh Governorate.

Through the Logistics Cluster, the airlifts were made accessible to humanitarian agencies including NGOs and UN agencies, to enable the delivery of comprehensive inter-sectoral assistance to the population of Al-Hasakeh Governorate. 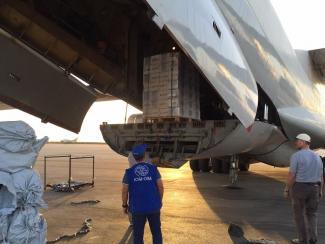 Airlift requests were submitted by humanitarian agencies to the Logistics Cluster, which planned the aircraft cargo and coordinated closely with teams at both Damascus and Qamishli airports to ensure a smooth and successful operation. The items airlifted included hygiene kits, high-energy biscuits, washing powder, food commodities, medicines, wheel chairs, and school supplies.

Issues with the loading and offloading of bulky but much needed non-food items such as tents, generators and mattresses were swiftly overcome thanks to the commitment of ground teams in both Damascus and Qamishli airports, whose efforts allowed for two Damascus-Qamishli rotations to be completed on a daily basis.

From the beginning of the year until 17 March, 393 airlifts were conducted delivering 30,485 m³ of critical humanitarian cargo to Qamishli, providing support to thousands of families facing dire humanitarian conditions.

“Thanks to the Damascus-Qamishli airlifts, UNHCR has managed to preposition stock and asset to assist 100,000 beneficiaries, both refugees and internally displaced persons (IDPs)” said Arnaud Blazy, a UNHCR logistics officer based in Damascus.