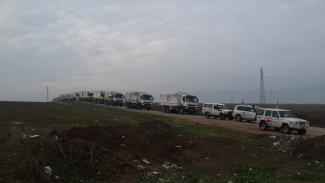 In the midst of a harsh and rainy winter season, on Monday 11 January, the Syria Logistics Cluster worked closely with the Syrian Arab Red Crescent (SARC) in coordinating the logistics aspects of the Joint Humanitarian Convoy to the besieged location of Madaya. Over 900 cubic meters of food rations, blankets, nutrition supplies, and medical items were transported via this convoy, which is the first part of three planned convoys to this location. The residents of Madaya were hungry and cold, and in desperate need of life-saving aid. The beneficiaries themselves helped in offloading due to the urgency of receiving food as soon as possible. Syrian Arab Red Crescent (SARC) volunteers participated tirelessly in offloading the cargo for the people in need. The food rations were distributed the next morning, with the offloading of cargo continuing non-stop until 3:00 am. ICRC, SARC, UNICEF, WHO, WFP, UNHCR and UNFPA are all contributing relief items over the three part operation. Simultaneously, the first part of the convoy to the besieged locations of Kefraya and Foua received aid via the first part of the three part-convoy planned for these locations. Reaching these two areas was particularly challenging logistically, as heavy rains had created severe muddy conditions. One truck was so badly stuck that it took two hours to free, delaying both missions. Overall, this crucial joint humanitarian operation fulfilled a severe need in locations which were completely besieged for several months, and was achieved via strong coordination and collaboration between various actors including SARC, OCHA, WFP Homs Sub-Office, and the Syria Logistics Cluster. The humanitarian community will continue to negotiate access to the 400,000 people currently in desperate need in besieged areas of Syria.