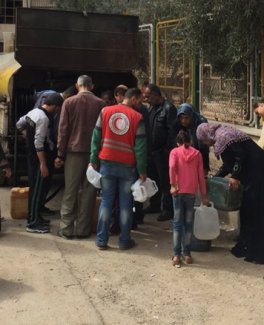 In response to continued drastic drops in temperatures and increased demand for heating fuel during February, the WFP-led Logistics Cluster supported the provision of a total of 100,000 litres of fuel for a total of 3,900 families, or approximately 19,500 individuals, hosted in 70 shelters in the Homs, Hama and Rural Damascus governorates. This activity was a partnership between WFP and UNHCR, as part of the joint UN winterisation strategy.
The objective of this winterisation activity was to provide fuel to the most vulnerable internally displaced person (IDP) shelters so that assistance provided through other winterisation distributions could be effectively utilised by beneficiaries. The transport of fuel was facilitated by the Logistics Cluster and the fuel was used for the cooking of food and warming of shelters, and was vital during an especially harsh winter storm, when freezing temperatures coincided with fuel shortages and price hikes in Syria.