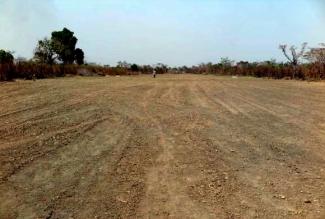 When the first flight landed in Sibut on 23 January 2016, the Aviation Sans Frontières pilots were greeted by the local community and national authorities. The airstrip had been closed to the public since 1976.

In Central African Republic (CAR) large quantities of humanitarian aid need to be transported by air, especially during the rainy season when the majority of the unpaved roads are inaccessible. However the poor conditions of many airstrips, hinder humanitarian access and limit the capacity to deliver timely and effective assistance to the people affected by the crisis.

Thanks to the United Nations Central Emergency Response Fund (CERF), the Logistics Cluster in CAR is supporting Handicap International in the rehabilitation of fifteen airstrips across the country.

With the precious collaboration of main humanitarian aviation operators, namely UNHAS, ASF, MSF and ICRC, the Logistics Cluster has so far identified ten airstrips critically in need of rehabilitation and since January 2016, three of these airstrips - Sibut, Obo and Alindao - have been rehabilitated. 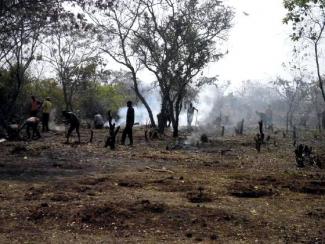 The rehabilitation of Sibut took 16 intense days. To make the airstrip practicable again, more than 100 local workers were employed each day to weed an area of more than 25,000 m².
The reopening of Sibut airfield will benefit seven INGOs, and eight national NGOs, allowing for safer and easier operations. «Thanks to this project, and to the expertise of Handicap International» remarks the Logistics Cluster coordinator «the humanitarian community will have wider and more effective reach to the populations affected by the crisis. As humanitarians, being as close as possible to those in need is our most important mission».