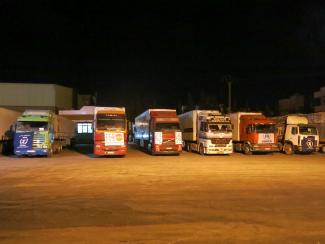 Following the recent resumption of land access, a ground-breaking inter-agency delivery of humanitarian assistance to Deir-ez-Zor city was successfully conducted on 27 September, thanks to the close coordination between the Syrian Arab Red Crescent (SARC), the Logistics Cluster, OCHA, WFP, UNICEF, UNFPA, UNHCR, IOM and ICRC.

A total of 36 trucks carrying critical multi-sectoral supplies including Food, Nutrition, WASH, Protection, Health and Shelter items left Homs in the early morning of 27 September and reached Deir-ez-Zor city at around 8 pm on the same day, accompanied by SARC.

Mattresses, clothes, High Energy Biscuits, specialized nutrition products (Plumpy Doz and Plumpy Sup), food parcels, hygiene kits, solar lamps, dignity kits, wheelchairs and crutches are among the items that will be distributed to the population of the city, whose humanitarian needs are dire after a protracted siege imposed by ISIL militants. 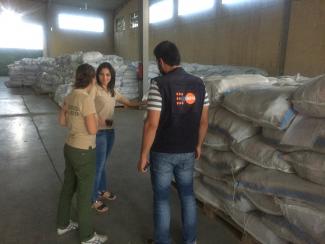 Prior to this large scale inter-agency movement, a number of humanitarian actors had successfully conducted initial deliveries of humanitarian supplies earlier in September. Furthermore, between April 2016 and end of August 2017 a high-altitude airdrop operation conducted by WFP had been in place, enabling the delivery of critical humanitarian assistance for the besieged population of Deir-ez-Zor city, cut off from land access since March 2014.

These developments represent a significant achievement for the humanitarian community as a whole, and a necessary step towards securing a steady supply of humanitarian assistance to Deir-ez-Zor city. With winter around the corner, the resumption of land access comes at a crucial time and will enable humanitarian actors to provide multi-sectoral assistance for thousands of families in a predictable and sustained manner.