The humanitarian crisis in the Democratic Republic of Congo (DRC) is as varied as it is complex: from heavy rains and conflict, to the Ebola response, forced migration and volcanic eruptions.  Faced with this diversity, a strong network of partners is crucial.

The Logistics Cluster, who has been active in the country since late 2008, works with hundreds of organisations on enhancing coordination and information sharing to ensure the humanitarian community reaches the country’s most vulnerable, remote and at-risk populations, and lives are saved.

In DRC, one of the biggest constraints facing logisticians is access. Recently, Logistics Cluster partners across the country have been busy renovating bridges, airports and more! All the latest below.

Travelling along Lushebere-Mpanamo road to assist remote communities fleeing conflict, different humanitarian actors faced a multitude of logistics challenges including roadblocks, broken bridges and mudslides. In provinces such as North Kivu, constraints such as these are a daily challenge. A combination of poor road networks, unsteady infrastructure, and a precarious security situation means the province’s rural communities are some of the hardest to reach populations in the country.

In response to difficulties faced by partners, Concern built three bridges along the route, which connects rural communities to the province’s key commercial hubs, renovating 10 kilometres of road surface and a retaining wall built to withstand landslides.

Moving south to South Kivu, ACTED is at the centre of the rehabilitation projects, most recently working on the road between Ngolombe and Kigulube (pictured).

Due to erosion from heavy rains and mudslides, the road went from being completely impassable by 4x4 and even by motorbike in certain sections, to being open again to trucks and a more regular stream of humanitarian traffic. 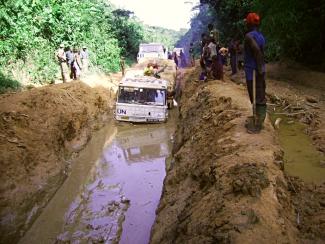 For the first time in over two years, humanitarian cargo can once again be transported by air to Zale, Ituri, with UNHAS and Aviation Sans Frontieres marking the first landing on the small strip since 2016 in June this year.

First built by the local Diocese, the original landing strip was maintained and used by humanitarians operating in the area for 20 years - until conflict caused it to fall into disrepair. Thanks to HI and Caritas, alongside help from the local church and community, the strip is once again operational, providing a key entry point for life-saving aid. This article in French tells you more about the project!