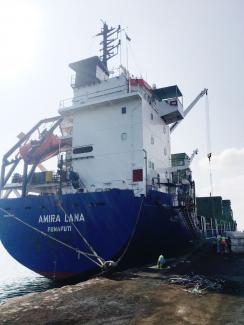 As the all air, sea and land entry points to Yemen were declared temporally closed on 6 November, the humanitarian community voiced concern over the consequences for the already strained population.

This closure, in fact, affected not only the commercial activities, but also the movement of humanitarian staff and cargo, including any transport facilitated by the Logistics Cluster.

After ten days, some sea ports and airports were re-opened in southern Yemen, allowing humanitarian flights to land in Aden and the VOS Apollo voyages to resume; however, to this day, the north of the country, including Sana’a airport and the ports of Hodeidah and Salee, remains inaccessible.

Approximately 145 mt of humanitarian cargo for the cholera response of WHO, WFP and IMC are on hold at the port of Djibouti, while an additional 18 mt of relief items of WHO and IOM are waiting to be airlifted to Sana’a.

A WFP-chartered vessel containing 1,313 mt of cargo on behalf of UNICEF and WHO did not receive clearance from the Evacuation and Humanitarian Operations Committee (EHOC) to sail to Hodeidah, therefore in agreement with both organisations the Logistics Clusters redirected the shipment to Aden. 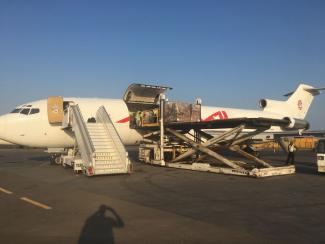 In addition to the cargo transport facilitated by the Logistics Cluster, UNVIM reports that, as of 15 November, 29 vessels with approximately 500,000 mt of food and fuel could not access the population of Yemen.

Humanitarian supplies in the country are depleting fast and fuel prices are increasing. An assessment conducted by the Logistics Cluster among forty-two organisations (INGOs, NNGOs and UN agencies) shows that the overall needs to ensure uninterrupted operations amount to over one million litres of fuel per month. To address this shortage, the Logistics Cluster is working with WFP on the possibility of importing 1.5 million litres of diesel over the next weeks.

This closure is taking a toll on Yemen, aggravating the already dire situation. The Logistics Cluster is working to ensure that as much cargo as possible is delivered and that all resources are in place to resume full operations once the blockade is lifted.