’We are reaching vulnerable communities in the most cost-effective and timely manner possible,” says Michael Ochala from Concern Worldwide.

Michael and his team are based in Bentiu town in South Sudan’s Unity State, working tirelessly to ensure life-saving assistance reaches the people most in need, as soon as possible. The Logistics Cluster supports partners like Concern Worldwide as they continue to extend the reach of their humanitarian response, delivering aid into remote areas throughout the country, including those becoming increasingly more accessible across Unity State.

The Beyond Bentiu Response (BBR), the first of the Beyond Response initiatives, began in early 2016. It followed a decision by humanitarian agencies to scale up in conflict-affected areas of Unity State outside of towns and camps, particularly in rural areas of Rubkona and Guit counties. A primary goal was to establish more durable alternatives to Protection of Civilians (PoC) sites - camps for displaced populations protected by peacekeepers with the United Nations Mission in South Sudan (UNMISS).

Nearly 60% of Internally Displaced Persons (IDPs) living in Bentiu PoC indicated surrounding locations as their origin and expanded service provision outside of the PoC was necessary to enhance quality of life of returnees.

Increasing humanitarian services outside of PoCs and towns - places which have also become logistics hubs for responders over time - meant overcoming a range of logistical challenges.

From a lack of viable transport service providers to poor infrastructure and a nearly half-year rainy season, individual organisations are faced with challenges that are difficult to overcome alone.

To fill this gap, the Logistics Cluster, working hand in hand with the International Organization for Migration (IOM), facilitates the Beyond responses using IOM’s Common Transport Service (CTS) project truck fleet. The cluster utilises CTS trucks in all its dispatch and reception hubs, transporting cargo from warehouses to and from airstrips, river ports, and storage sites. 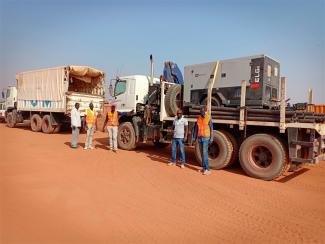 This common service, via the Beyond Responses, is also indispensable in reducing reliance on costly air services – a transport mode which used to be the only option to reach many locations throughout much of South Sudan.

In 2017, the cluster and its partner IOM began supporting humanitarian organisations operating in Western Bahr el Ghazal State and surrounding areas with the Beyond Wau Response, transporting relief items to previously unreachable destinations. And, this year, road and security conditions allowed the BBR to expand its impact geographically to include important destinations throughout Central Unity, including Koch, Leer, and Mayendit Counties: a huge achievement for the humanitarian response in South Sudan.

This opportunity has allowed organisations to preposition large amounts of humanitarian goods throughout these areas before rainy season arrives and roads become impassable. In supporting the humanitarian community though the provision of common services, the Logistics Cluster helps improve the efficiency and timeliness of the wider response. 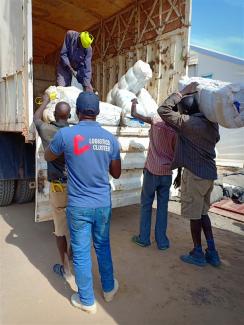 “Hiring reliable trucks to locations outside Bentiu would be very challenging for Concern Worldwide. It could take days, if not weeks,’’ explains Ochala. ‘’This is why the CTS, facilitated by the Logistics Cluster, has become a vital part of our logistics operation in the area.’’

The Logistics Cluster supported the first BBR mission in February 2016, when approximately 17 metric tons of non-food items were dispatched to the surrounding area outside Bentiu town using CTS trucks.

To date, the cluster, in conjunction with IOM’s CTS project, has served Beyond responses in areas outside of Bentiu, Malakal, Bor and Wau towns, with more than 1,100 mt of cargo delivered in support of 33 organisations.

This road transport represents an incredible cost savings for the humanitarian community—if this amount of cargo was transported using the cluster’s MI8 helicopters, the cost would be approximately $7 million!

Working together with IOM’s CTS project, the Logistics Cluster continues to support humanitarian response in South Sudan in the most cost-efficient way.