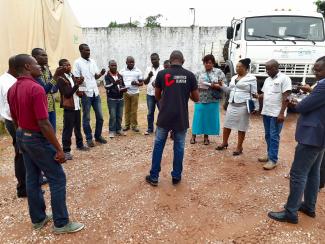 Active in the Democratic Republic of the Congo for almost ten years, the Logistics Cluster team is composed of 10 people based in five cities. At the core of its strategy is training local and international staff on a wide range of logistics topics, but why is training such an important aspect of their job?

Geographically, the Democratic Republic of the Congo is by far the largest Logistics Cluster operation. The road leading from Kinshasa to the eastern city of Goma, next to the border with Rwanda, extends for more than 2,700 km. Bunia, a city next to Lake Albert and the border with Uganda, lies 2,000 km northeast of Kananga, the fourth largest city in the country and home to a diverse logistics base in which the cluster supports partners operating in Kasai Central.

Apart from facilitating road and air transport, and storage for relief cargo, the Logistics Cluster is deeply committed to the task of training humanitarians to make sure their logistics skills are up to the difficult challenges posed by the crises in the Kasai, the Kivus, Tanganyika, and more recently Equateur.

The numbers of people affected by several crises throughout the country are striking. In Kasai, 3.2 million people remain food insecure, whilst 750,000 are still displaced due to ongoing clashes. In the east of the country, armed conflict in North and South Kivu has displaced over 1,700,000 people. In Tanganyika, more than 800,000 people lack access to basic goods, services and livelihoods (ReliefWeb, 2018). In the western Equateur Province in May of this year, the ninth outbreak of Ebola virus disease to occur over the last four decades caused over 25 deaths in less than a month (WHO, 2018). 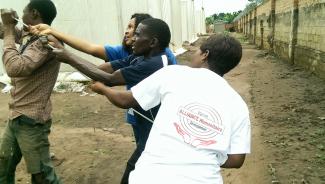 In addition to man-made constraints, the frequency and abundance of rainfall (averaging one metre per year) during the rainy season is a major cause of damage to road infrastructure. Roads often become impassable, slowing down and sometimes even blocking the delivery of emergency humanitarian aid and greatly increasing its cost. On average, it takes a week for a truck carrying 20 tons of food to travel along the Tshikapa-Kananga road, a 260-km stretch of vital emergency response in the province of Kasai on which trucks can sometimes become stuck for up to 15 days.

Having dedicated local humanitarians who can rapidly and efficiently provide input for maps such as blocked roads, broken bridges or warehouse locations is essential for an emergency response, thus training in topics such as geographic information systems (GIS) is so important for the cluster team in DRC.

“We want to form groups of people with critical knowledge and the right skills, so if an emergency strikes, the knowledge is already there for decision makers to take immediate and informed action,” says Hannoa Guillaume, the Information Management Officer for the Logistics Cluster. "The capacity to collect geographical information, to plot it and to disseminate is lacking in DRC. In the recent Ebola emergency, when it came to producing maps, capacities were strained and the government heavily relied upon partners for this task. Optimising cargo movement becomes simply impossible if you can’t, for example, accurately pinpoint an airstrip on a map. We did find one GIS-skilled staff member, but if we could rely on a battery of people pinpointing key locations, we would have been able to produce maps much faster for the wider humanitarian community."

There is a high level of expectation and appreciation for the diverse training events, which are very much welcomed by the humanitarian community in DRC. “In our case, the Storage Training has helped us to improve the way we manage our stocks at the warehouses. It has also taught me new ways to organise warehouse activities such as reception, expedition, inventories and the management of dangerous goods,” says John, a fellow logistician from Première Urgence Internationale. 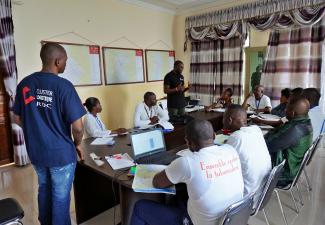 John was part of 28 logisticians, all Congolese nationals, who participated in the Storage Training organised by the Logistics Cluster in the Kasai. From basic administrative procedures to security measures, the course is aimed to build logisticians skills to better manage storage of lifesaving cargo such as emergency food, health and wash items, medical material and shelter kits.

As of June 2018, the Logistics Cluster team in DRC continues to offer warehouse management, MSU setup and GIS training for humanitarians throughout the country.